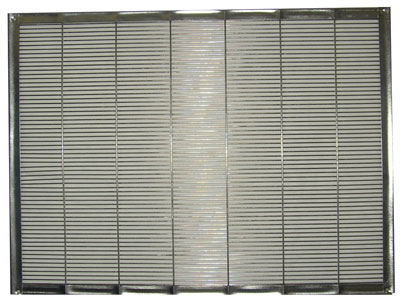 A queen excluder is a metal or plastic grid which is used to keep the queen laying in boxes where you want the brood to be & prevent her from laying in honey supers. The holes in the grid are big enough so the workers can pass through but not big enough for the queen or drones to pass. Queen excluders are also used to separate queens in a two queen system, to raise queens in queen-right colonies, and for emergency swarm prevention. An excluder is also useful for restricting the queen to areas so she can be found easier.

Worker bees can be reluctant to pass through the excluder to store nectar in the upper boxes & will instead store too much in the brood area. This takes cells away from the queen to lay in thus causing overcrowding in the brood boxes. This overcrowding frequently leads to swarming.

Workers can be enticed to pass through the excluder by spritzing foundation & comb in upper boxes with sugar water. You can also put supers on before putting the excluder on so that they get use to storing in them.

You can also lure nurse bees to pass through the excluder by moving an upcapped brood frame above the excluder & they will go tend to the brood. Be careful not to take a frame with the queen on it.

For the West Virginia region, queen excluders & supers can be placed on in March. The excluders can removed in July when the nectar flow stops. Never leave a queen excluder on year round. During cold months the queen will not be able to move freely with the other bees & they will not break the cluster to eat honey stores & will die of starvation.

Learning bee behavior & how to use your equipment will help you to become a successful beekeeper.